1958 – February 1958 saw the donation of a Cub Flag by Mrs Lynn, and on 6th May the Group Executive meetings are moved to Swanley Secondary School. With Kent County Council refusing to keep the school open at weekends the group decides to look for a more suitable venue.

1959 – 12th January, the committee tried to purchase a plot of land next to 10 Everest Place (what is not the railway station car park!), but a decision was not reached by the council. Instead on the 9th July an offer is made to rent a disused mortuary in the corner of St Mary’s churchyard. The size of the building was only 16ft by 17ft.

1960 – In March the group purchased 3 shop soiled tents from Edgintons for £33 and the first summer camp was held at Knole Park. 12 boys attended at a cost of £2 10s, and the Chief Scout even paid a visit. A trek cart was put on the train to Sevenoaks to carry the equipment.

1961 – The Council offered to sell the mortuary to the Group for £175, but estimates to extend the building are around £803. The Group apply for a grant but as it is unable to guarantee 25% the offer collapses. At the tune the Group funds are £147 12s 9d.

1963 – the Cub Pack has 53 Cubs, so has to be split into two packs – Hengist and Horsa. There are 31 Scouts in the Troop and the Group is still meeting in the 16ft by 17ft morgue! In the April a Parents Association is formed to raise the extra funds needed for a new building. Parents are asked for 2/6d per month (12.5p). The Webb Ivory Christmas catalogue is also introduced to help.

1964 – The annual capitation fee for membership of the Scout Association in 1964 came in at £36 15s (£36.75). To put that into context this year’s is £1720.50!. In the April local builder Gough Cooper offered the group a plot of land in Mountain Hill for the princely sum of 1s (5p). It measures a spacious 30ft by 50ft but was in the Green Belt. Shortly after, the Council gave the Group notice to quit the morgue by 31st August 1965. A prefab building (the ex Lewisham Town Hall) is purchased for the sum of £50. It is dismantled and collected by 21 parents using an open backed lorry, with some parents precariously travelling back on top of the building (imagine getting away with that these days!). It is then stored behind the morgue.

1966 – On 3rd February the morgue is vandalised and 14 panes of glass are broker, all the group can do is board them up. IN July after years of arguments over the Green Belt status the work starts on clearing the Moultain Hill site. Unfortunately in the December the Group is left temporarily homeless after arsonists set fire to the morgue, completely destroying it. 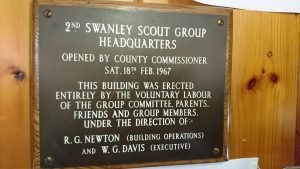 1967 – a new flag is purchased in the January to replace the one destroyed in teh fire and in the February the new HQ is off to a start. The building took 7 months to compete at a cost of £1269 16s & 2d! Parent gave up their weekend to undertake work under supervision of Geoff Newton. Even after opening several more weekends were needed to dig the cesspit, lay the path around the building and put up the chain link fence.

1977 – 1979 – The Parents Association was wound up in the April of 1977 transferring £2150 into Group funds. The following February the Group ask Gough Cooper for more land to enable an extension to be built. The Group’s offer of 5p was accepted! The site was cleared and a concrete base put down. The parents, leaders Ventures and Scouts then set about  work of erecting a Marley Prefab at the rear of the existing building.

In June 1979 the structure of the building was up and during the next two years work was carried out to erect dividing walls. This provided a kitchen, 2 back rooms and racking for storage. The two rooms were joined together with “the link”.

1980 – The Group badge was designed in November 1980, continuing the Viking theme from the names of the Cub Pack, the double headed YXA is adopted as the Group’s emblem.

1985 – A ceramic axe is presented to the Group by Mark Collins to be used as a trophy. This still to this day hands in its cabinet above the front door and emeges once a year to be presented to the winner of the prestigious “YXA Trophy” A nomination for this is put forward annually from each section with the overall winner being announced at the Group’s AGM 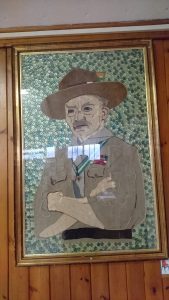 1987 – The Baden Powell collage (that still hangs in teh hall now), is put together by members of the group. The buttons in the background were sown on by the cubs.

Also this year the Group purchase an old Bedford London Ambulance to transport boys and equipment around. It defies everyone’s expectations and keeps going until 1996 when teh new seatbelt laws (and more than a few mechanical issues) saw it on the scrap heap. Anyone who ever rode in her would never forget the experience though!.

1989 – Three years after their creation, on the 22nd February the Group opened their first Beaver Colony, enabling the Group to provide 15 years of scouting. It opened with 24 boys and 3 leaders.

1992 – Due to a lack of leaders, the group took the decision to combine the Hengist and Horsa Cub Packs. It has run with only one pack since.

1997 – The group held a family activity day and campfire to celebrate the Group’s 40th birthday. Many ex members and leaders returned with over 300 attending on the day. This is the last major gathering of past members.

1998 – After 35 years with the Group, the last remaining member of the original “Parents Association” Ron Jary, stood down as Chairman from the Exec Committee. Given the work that Ron had put in over the years (no one said no to Ron!) he was honoured with the title of Group President.

Around the same time many other long standing members of the Group including Ivan Fry, Group Scout Leader also stood down, leaving it to the next generation to carry the group forwards. In Ivan’s case it was down to a new regulation that required leaders to “retire” from uniformed roles at the age of 65. This rule has now been withdrawn.

2001 – With the Scout Association’s decision to restructure the older sections the Venture Scout unit is wrapped up leaving the name Vikings vacant once more.

2012 – A donation of a kitchen from Network Rail saw the huts first major change since its original build.

2014 – Due to lack of leaders coming forward the Scout Troop had to shut in January 2014. This was followed by a period of uncertainty with the Group running with just 3 leaders, a couple of helpers and an exec committee of just 3. They chose not to give up though and kept the Group going.

From its humble beginning to today, the Group has had many ups and downs. What has kept it going it the passion of its volunteers. Parents and friends who give up their time for free to inspire and provide for generations of children, many of whom then come back and help as adults.

These volunteers don’t have more free time than anyone else, they work, have families. But what they do have is heart, and we have to thank them from the bottom of our hearts for the legacy they have given us. We hope with the help of many more we can keep the group going for another 60 years..!